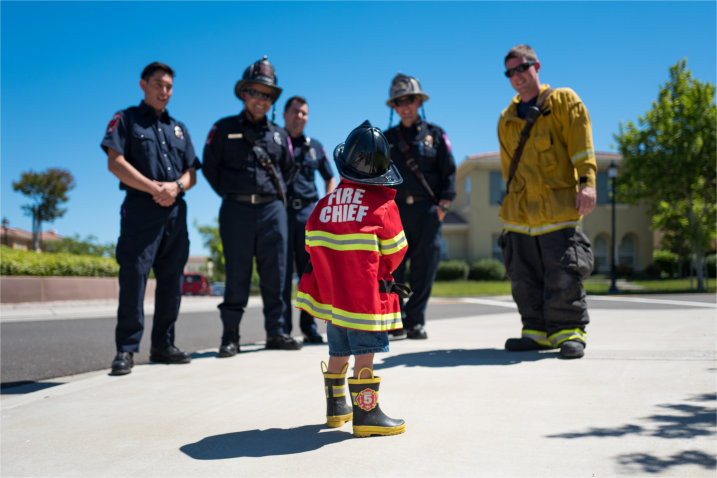 Irony is the unexpected. And it’s the most powerful, yet the most subtle, of all the plot devices a writer has in his toolkit. When it’s used properly, the written word becomes transcendent.

Irony is subtle and it can be tricky to use effectively, but it needn’t be so difficult to learn. I’ve taught writing workshops to fourth graders who’ve worked irony into their scenes brilliantly, and I’ve worked with first graders on storytelling techniques who delighted in creating surprise endings to their tales, particularly when the surprise was humorous. We simply need to train our eyes to see irony, and we need a bit more practice working with it.

Irony is when something happens that’s the opposite of what we expect. Traditionally, there are three types of irony taught:

Why Irony is Effective

Irony bolsters writing for several reasons. The first is that it can heighten suspense. Suspense must be the underlying objective when writing fiction. If you can keep your reader turning the page—and irony does that—then you’ve mastered the art! Suspense intensifies whenever an author raises questions in our minds and then delays the answering of those questions.

I would keep reading to learn the answer!

The other reason irony adds so much quality to writing is that it’s brain-candy. It’s pleasing to be surprised. It keeps us from getting bored, and it challenges us with a view at odds from the obvious.

Situational irony is a head fake, and that requires planning. (Sorry to break it to you, but good writing takes time and a LOT of rewrites!)

I show a composition that uses situational irony in my classroom presentation for 4th graders. After I show them a lame composition (that follows the rules they were given) I offer a rewritten version. Here it is: 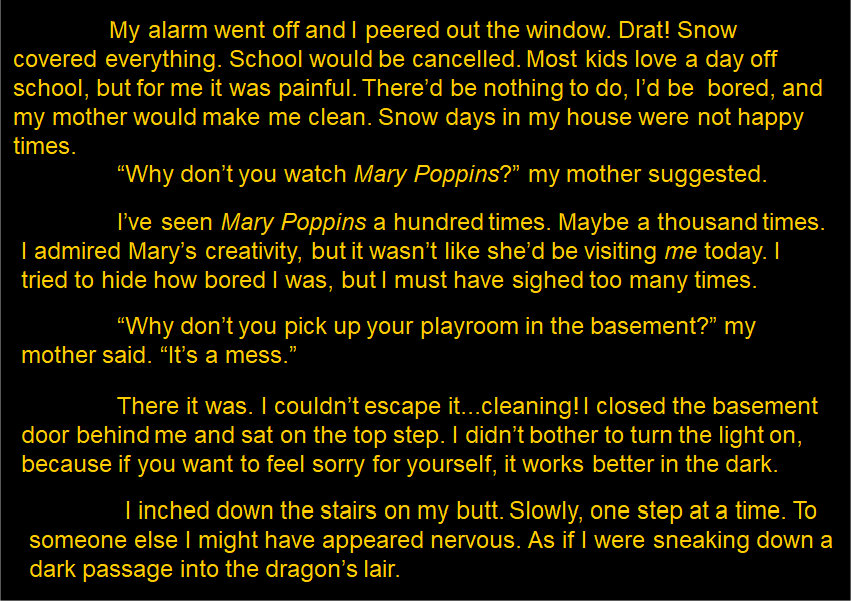 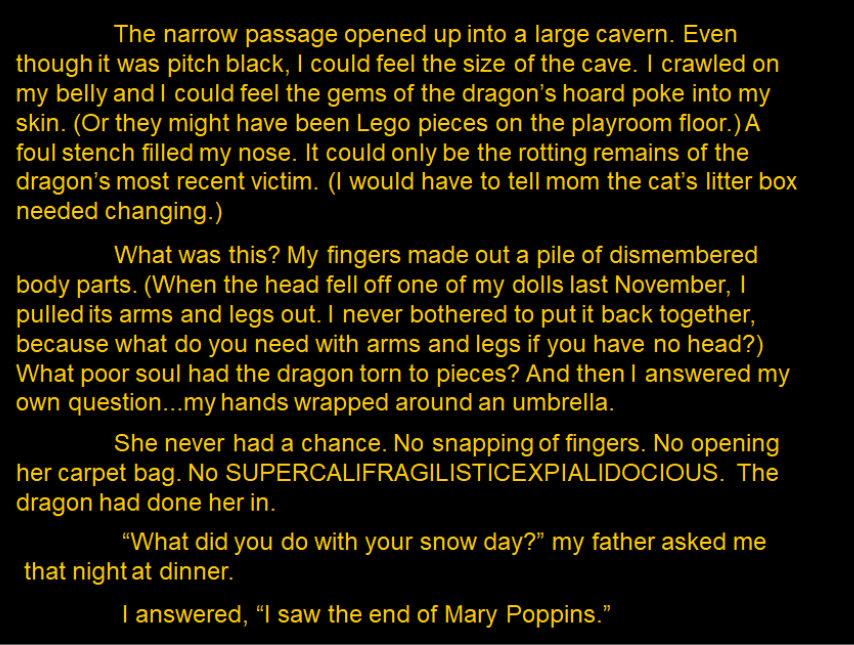 This final composition didn’t happen on the first draft. It took quite a few rewrites!  For the later pieces to seem more real, I knew I had to have the lights out (The next to last paragraph on page 1.) This became obvious early on, when feeling the Lego pieces as I crawled over them, smelling the cat box, and feeling the doll parts, could more easily be imagined as something else if I were in the dark. So I added, “I didn’t bother to turn the light on, because if you want to feel sorry for yourself, it works better in the dark.” That made the later bits much more convincing.

And I started with a simile, which introduces the dragon’s cave (“…as if I were sneaking down a dark passage…” in the last paragraph on page 1), but I shift into a metaphor in the first paragraph on page 2, assuming I’d made the point. This version took me about 2.5 hrs to draft. (That’s me, with all of my writing skills at their peak!)

I’m saying that you need to give writers encouraging words, which allow them room to grow…and then give them time! Time to try different versions and figure out which works better. Time to play, and figure out if the new version goes in a direction they like. And time to figure out if they’ve said all that needs to be said. Mostly, give them time to get it not-completely-wrong, but not-completely-right and learn from their mistakes!

In the fall of 2016, just days before the presidential election, Sara Bareilles produced a song (sung by Leslie Odom, Jr.) which appeared on This American Life, that explored how President Obama may have felt about the candidacy of Donald Trump. “No man’s ignorance will ever be his virtue,” Odom sings. “Is this the best we can be? Seriously?”