What Is a Stroke? 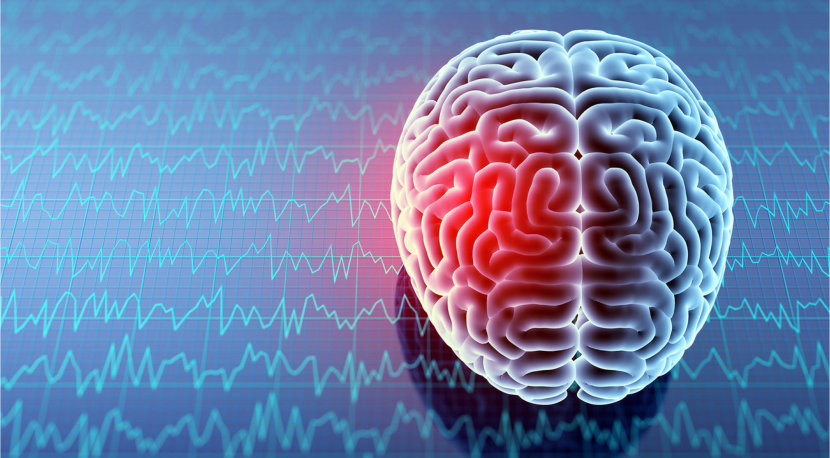 A stroke occurs when any part of the brain is deprived of blood flow (hence, oxygen) and the affected brain cells die. As the third leading cause of death in the United States, a stroke is a big deal. Even after a few minutes, brain cells will die, so the faster you reestablish blood flow to the affected area, the better the prognosis will be. You can have anything from a small, localized stroke which passes in minutes or hours (what is known as a TIA, or transient ischemic attack) or you can have a major stroke which can kill you, or leave you severely brain damaged. Stroke is the leading cause of permanent disability in the United States.

Because we’re talking about brain tissue, one fact is worth stating: brain tissue doesn’t grow back. It’s one of the few tissues in the body where once the brain matures, that’s all you get! So when blood flow is interrupted, you better get it back in a hurry! (New studies are indicating some portions of the brain can revert back to an embryonic state in some conditions, but that’s developing research.)

In the image on the right, a clot-busting drug is administered to a patient suffering from an ischemic stroke, and the results are impressive. But keep in mind how quickly the time elapses when you’re having any kind of medical emergency for the first time. If you live near a hospital, and someone can drive you there, you might get there in 60-90 minutes from the onset of symptoms (if the stroke was instantly identified). If the hospital is ready for you, the MRI would take 30 minutes, and then it would need to be reviewed (another 30 minutes), and if a clot-buster is called for 30 more minutes to prep and administer it. You’d be hard-pressed to get it in in under three hours! (The image on the right was likely taken from a patient already in the hospital.) 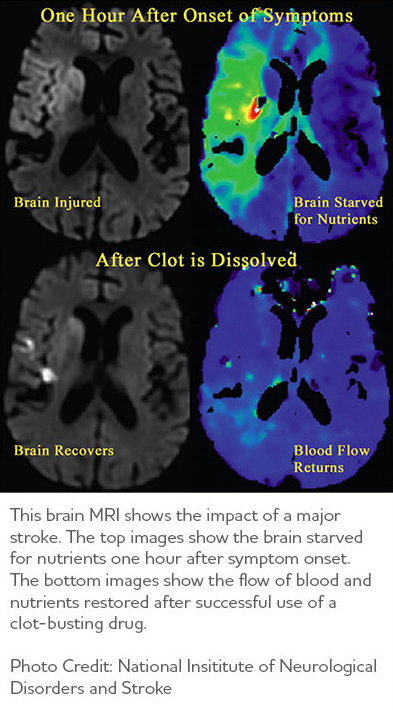 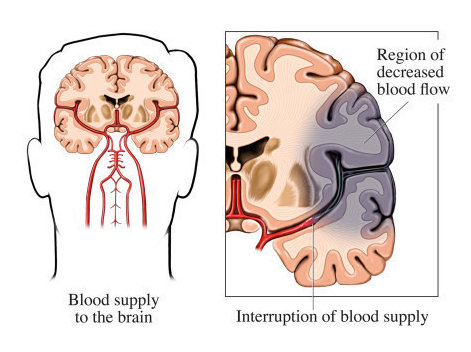 Two things will impact how serious a stroke will be: where the interruption of blood flow occurs, and how long before it’s treated. Given the myriad of vascular pathways in the brain, it’s impossible to predict where a blood clot will lodge (in the case of ischemic stroke.) But there’s no part of the brain that’s good when damaged. It means that two people who’ve suffered strokes will have different outcomes, but neither one will be desirable.

As for the question of treatment time, seconds and minutes are more crucial than for most other medical emergencies. Get to a hospital immediately!

Ischemic strokes are brought on by blood clots, and are by far the more typical (87% of strokes), but hemorrhagic strokes, which occur far less frequently, are typically more serious (a bleed from a ruptured blood vessel). These have a much higher mortality rate than ischemic strokes.

Ischemic strokes have a chance to turn into hemorrhagic strokes if left too long without attention. The blood vessels weaken when they’re starved of blood, and if blood flow is reestablished, they’ll burst. This typically happens 24-48 hours after an ischemic stroke’s onset. This is referred to as a hemorrhagic conversion or hemorrhagic transformation. 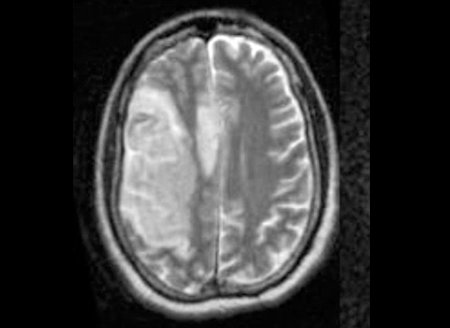 “For patients with hemorrhagic primary [a hemorrhagic stroke] or conversion strokes [an ischemic stroke that went through a hemorrhagic conversion] or those with life-threatening elevation in their intracranial pressure, urgent neurosurgical consultation is required…”

The image to the right is an MRI showing a large portion of the brain affected by a hemorrhagic conversion (the left side of the MRI). This image was presented in “Acute Stroke: Slideshow” on Medscape.com, a web site of medical news for doctors.

I had an ischemic stroke on Wednesday, February 22 2017, at 6:30 PM, in the left side of my brain. It was five minutes from the time I felt “off” until I collapsed on the kitchen floor, and I wasn’t found until 11:00 AM Saturday, February 25. The ambulance took me to the North Shore Medical Center in Salem, MA, (one town away). The doctors in Salem immediately judged the stroke was too complex, and sent me to Mass General Hospital (MGH) in Boston. At MGH, when I was diagnosed, (sometime in the late afternoon Saturday) very little tissue was still alive on the left side of  my brain. I’d had a hemorrhagic conversion sometime in the last 48 hours.

It was three months before I could make it home again, and I suffered three separate bone breaks in the six months after that. I received physical therapy, occupational therapy, and speech therapy non-stop during my first year, and I’ve continued physical therapy and occupational therapy straight through since then. That I’m actually able to write about this event is a miracle in itself, but I’ll save that for a future post. Not bad for half a brain, eh?